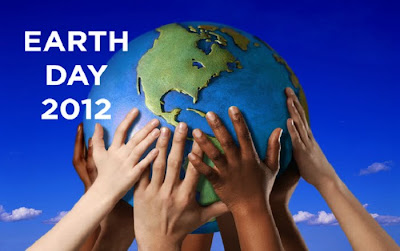 To honor our planet and celebrate Earth Day 2012, Alligator River National Wildlife Refuge and the Red Wolf Recovery Program are hosting a very special Earth Day howling on Saturday, April 21st. The free event starts at 7:00 pm at the Creef Cut Wildlife Trail parking lot. No registration is required, but space is limited. Visit us on Facebook for more information.
Posted by USFWS Red Wolf Recovery Program at 4:30 PM No comments:

The following blog entry about gunshot mortality of red wolves is excerpted from a chapter in the forthcoming book entitled "The Secret World of Red Wolves: A True Story of North America's other Wolf," by T. DeLene Beeland (University of North Carolina Press, coming early 2013), and is reproduced here with the permission of the author. CAUTION: Images included in this blog may be disturbing to some readers. 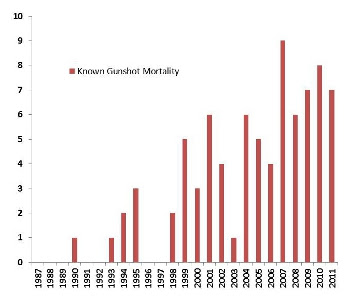 Unfortunately, the breeders are hit disproportionately according to the red wolf team. Since 2004, the biologists calculate that breeding individuals compose 73 percent of the wolves shot illegally. Losing a breeder busts up packs which in turn leads to single wolves becoming vulnerable to intraspecific aggression. The loss of a breeder can also equate to pups or pre-dispersing age juveniles losing parental protection. Most worrisome to the red wolf field team, losing a breeder puts that pack's territory at risk: they had too often observed fertile coyotes move into territories shortly after the disruption of a breeding pair.

[Red Wolf on left; Coyote on right. Photo credit: red wolf, Crawford/USFWS; coyote, USFWS]
A study published in 2011 in PLoS-ONE by Dennis Murray and Amanda Sparkman from Trent University, and Lisette Waits from the University of Idaho, was the first to address the issue of how anthropogenic killings affect the red wolf population. The researchers tested two ecological theories: one proposed that human-caused killings have an “additive” effect which reduces a population’s overall survival rates, while the second proposed that human-caused killings trigger a “compensatory” effect which makes up for unnatural losses, possibly by reducing the natural mortality rate which then balances the overall survival rate.

The researchers divided the red wolf population growth into two major time periods, from 1990-1998 and 1999 to 2006, and classified the first timeframe as having a low population density (when the reintroduced population was still growing) and the second as having a high population density (when the recovery area began to approach being full). They found that at low population densities, the red wolf population experienced a strong additive effect from human-caused killings. But at higher densities, they found evidence for both additive and compensatory effects. They hypothesized that as stable red wolf packs dissolved due to human-caused killings, it freed the surplus breeding-age red wolves to either begin breeding with the surviving mate, or to take over the territory of a dissolved pack and form an entirely new breeding pair... 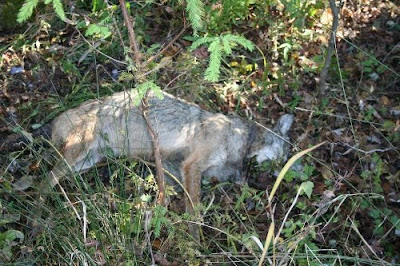 ...A second study with insight to how anthropogenic killings affects red wolves took the form of a dissertation under the tutelage of Lisette Waits, a wildlife geneticist at the University of Idaho. (Waits is also the person responsible for testing the blood samples of the red wolves for the genetic markers that qualify them as true red wolves.) Waits and her then-student, Justin Bohling, examined characteristics of individual red wolves that were involved in hybridization events verified to have occurred. They discovered that the majority of the red wolves that crossed with coyotes did so under similar circumstances.

“A high proportion of these hybridization events were occurring after the disruption of a stable breeding pair,” Waits said. “Particularly, it’s been a problem associated with gunshot mortality during the hunting season, and the hunting season precedes the breeding season.” 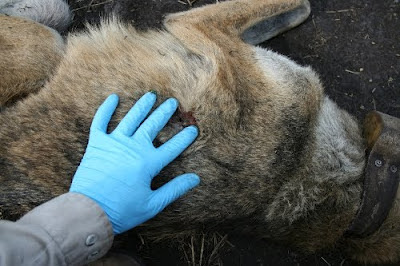 [Red Wolf. Photo credit: Nordsven/USFWS]
Waits and Bohling pored over breeding records and the individual life histories of red wolves known to have been involved in hybridization events between 2001 and 2009. They studied twenty-one hybrid litters and ninety-one red wolf litters and examined them for correlations with age and breeding experience, if the animal had a mixed red wolf/coyote ancestry, birthing location within the red wolf recovery area, and whether pack disruption was a factor leading to future interspecies crosses. They found that the hybrid litters clustered toward the western side of the Albemarle peninsula, and that the average age of female breeders who birthed hybrid litters was slightly less, at 4.2 years old, than the average age of female breeders who birthed red wolf litters at about 5.4 years old. But perhaps the most interesting result was that thirteen of the twenty-one [62%] hybrid litters were produced after a stable breeding pair of red wolves were broken apart. Seven of these dissolutions [54%] occurred because a breeder had been shot and killed, while two more involved the death of a breeder from poison or trap injuries—in all, nine of the thirteen [69%] broken pairs were attributed to human actions. 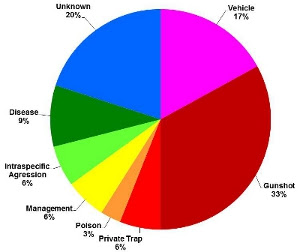 [Percent mortality of red wolves, 1999-2011]
In the eyes of the red wolf field team, Murray's study described the past but they felt the spike in gunshot mortality they had observed since 2004 significantly altered the possibility that the compensatory effects would continue to balance the additive effects. They also countered that the study failed to capture the level of management effort that the team had to invest in fostering new red wolf pairs each time a pair dissolved; not to mention their efforts to trap, sterilize and monitor new coyotes that moved into a former pack's territory. They had increased their management effort in step with the uptick in illegal killings since 2004 and they felt that Murray's conclusions, that the additive and compensatory effects would continue to balance each other out at high population densities, omitted how an increased rate of killings stretched their management workload to the point of bursting. They believed Waits and Bohling's study accurately described the scenarios they had witnessed time and time again when a pack dissolved largely due to human-caused reasons and hybridization often followed.

The red wolf recovery program hinges upon successful field work, and in order to grow the population the biologists believe their breeders need to maintain stable territories and stable packs that regularly produce puppies each spring. But the illegal killings, whether accidental or not, are possibly curtailing the program’s success including the field staff’s ability to control hybridization issues by using coyote sterilization as a management tool.

The U.S. Fish and Wildlife Service is investigating the suspected illegal take of several red wolves found dead in the Red Wolf Recovery Area (Dare, Hyde, Tyrrell, Washington, and Beaufort Counties, NC). Contributions from various organizations and individuals have resulted in a reward of up to $15,000 for information directly leading to an arrest, a criminal conviction, a civil penalty assessment, or forfeiture of property on the subject or subjects responsible for the suspected unlawful take of these red wolves. The red wolf is protected under the Endangered Species Act. The maximum criminal penalties for the unlawful taking of a red wolf are one year imprisonment and $100,000 fine per individual. Anyone with information on the deaths of red wolves is urged to contact Special Agent Sandra Allred at (919) 856-4786 or North Carolina Wildlife Resources Commission Officer Robert Wayne at (252) 216-8225.
Posted by USFWS Red Wolf Recovery Program at 3:25 PM 1 comment: